The 5G router Huawei 5G CPE Pro 2 (model number: H122-373) is now available in many countries since 2020. The device can use all currently available cellular technologies and, at around 450USD without a contract, is significantly cheaper than the previous Huawei 5G CPE Pro. 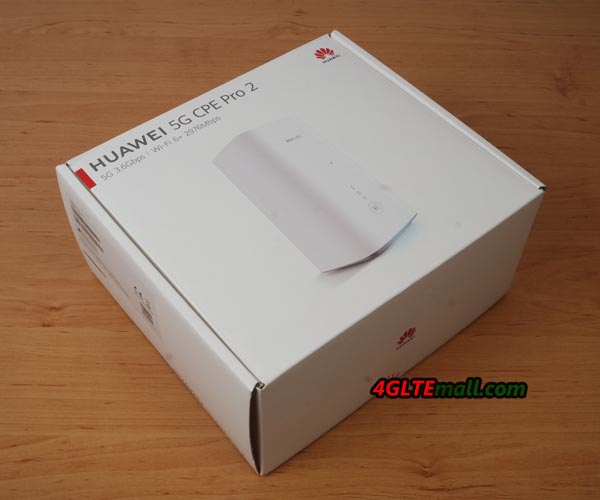 The Huawei 5G CPE Pro 2 is package in a simple box. In addition to the 5G WiFi router itself, it includes a power supply unit with a permanently connected power cable (output: 12V / 2A) and a short LAN cable. A printed, multilingual quick guide is also included, which is easy to understand thanks to some graphics.

At first glance, the Huawei 5G CPE Pro 2 hardly differs from an ordinary 4G LTE router such as the Huawei B618 or Huawei B818. The Huawei 5G WiFi router is relatively compact and, thanks to the white plastic body in the cube design, quite inconspicuous. Only a large 5G logo on the top reveals that it is a top modern 5G router. 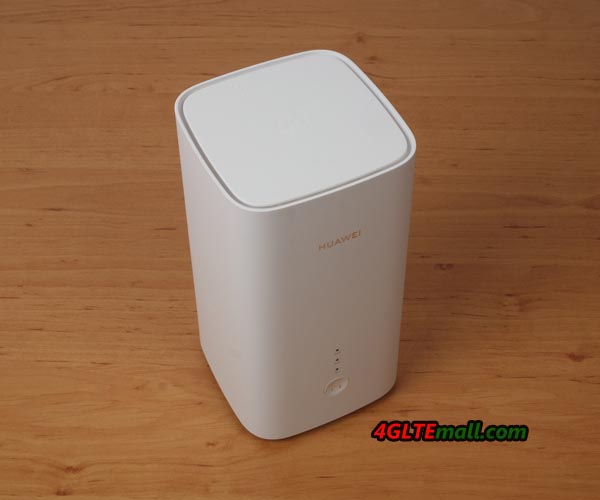 On the back of the Huawei 5G CPE Pro 2 there are two RJ45 Gigabit Ethernet LAN ports, one of which can also be used as a WAN port. This is useful, for example, if you want to use an existing cable or DSL modem.

There is also a connection for the power supply unit and an RJ11 telephone connection on the back. Unfortunately, the telephone function may be deactivated in the software of the Huawei 5G CPE Pro 2 H122-373 offered in some countries. 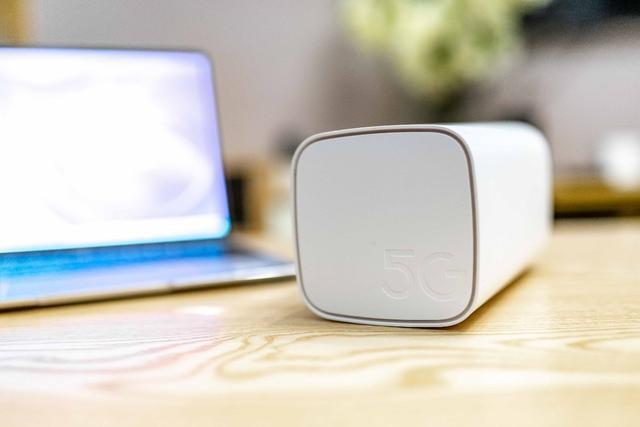 The slot for the nano SIM card is located on the underside. This is protected by a rubber cover. Incidentally, the Huawei 5G CPE Pro 2 can be used with any SIM card; there is no SIM lock for the router models.

A reset button and a power button are also located on the bottom. In addition to the SIM card slot, there is also a USB Type-C connection. The connections are certainly one of the biggest points of criticism of the Huawei 5G CPE Pro 2. With the LAN connections, at least a connection with a higher performance than 1 GBit/s would have made sense, after all, the router can theoretically achieve data rates of up to 3.6 GBit/s in the 5G network. Even in practice, speeds of over 1 GBit/s are not uncommon.

In addition, many users will miss connections for an external antenna. It is true that the use of an external antenna in 5G operation only makes limited sense, as a large number of frequency ranges are often bundled and more than 2 × 2 MIMO is used. Unfortunately, there is also no USB port, for example to integrate storage media into the network.

On the front of the Huawei 5G CPE Pro 2 there are some LEDs that signal the operating status and the reception strength. So you can easily see in which network technology (4G or 5G) the router is working. There is also an optically subtle LED on the underside, which Huawei calls “Ambient Light”. However, this LED light strip does not apparently fulfill a special function; 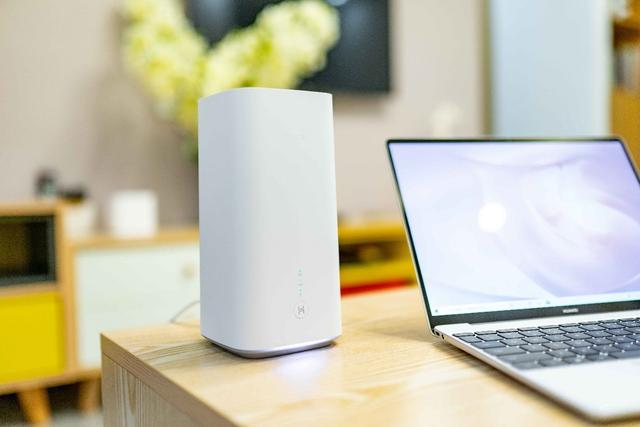 Since the Huawei 5G CPE Pro 2 can apparently get relatively warm during operation, Huawei has installed an active fan. In the test, however, this was not audible even in longer 5G operation.

Test in the 5G network

A total of 11 different 5G frequency bands are supported by the Huawei 5G CPE Pro 2, including the bands n1, n3, n7, n28 and n78, which are relevant for Europe and Asia. 4G LTE Bands 1, 3, 7, 8, 20, 28 and 32 are supported in LTE operation. This means that the Huawei 5G CPE Pro 2 has very good compatibility with current and future cellular networks.

The Huawei 5G CPE Pro 2 is currently one of only a few end devices that can use the 5G band n28 in conjunction with LTE band 20 as an anchor. Vodafone is expanding 5G band n28, especially in rural areas, as it enables very high ranges. This makes the router, which Vodafone markets as “Gigacube 5G”, ideal for 5G in rural areas.

In the test with a SIM card in the telecommunications network, the router ran smoothly on the frequency bands n1 and n78, of course always in NSA mode with an LTE cell as an anchor. In theory, however, the router can also use 5G SA as soon as a corresponding core network is available. 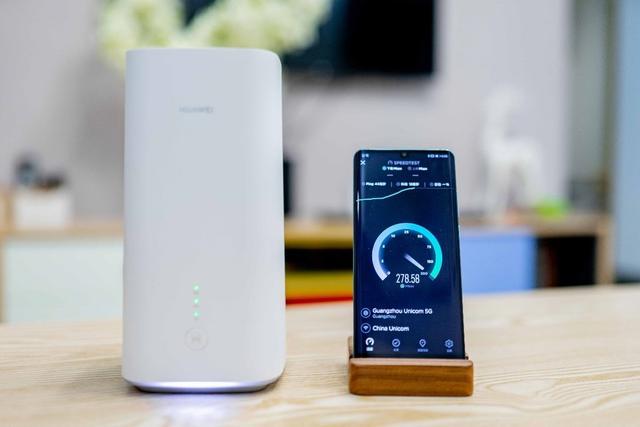 The router could not be tested in the Vodafone 5G network due to the lack of a suitable 5G SIM card.

The Huawei 5G CPE Pro 2 supports the new WiFi 6 standard and theoretically achieves up to 2402 Mbit/s in the frequency range around 5 GHz and up to 574 Mbit/s in the frequency range around 2.4 GHz. In practice, the data rates are usually significantly lower. As it turned out in the test, most WiFi 6 end devices can only use lower bandwidths, for example because instead of 4 × 4 MIMO only 2 × 2 MIMO antenna technology is used. Nevertheless, the router with WiFi 6 is significantly faster than older router models and with a current WiFi 6 device, data rates of around 1 Gbit/s can be achieved quickly, for example with the Samsung Galaxy S20 or the Oneplus 8 Pro.

In addition to the speed, the WLAN range was also convincing in the test. A large apartment can be supplied without any problems, unless there are super thick walls between the devices. In theory, other WiFi routers can also be combined to form a mesh network via the Huawei HiLink Mesh service. 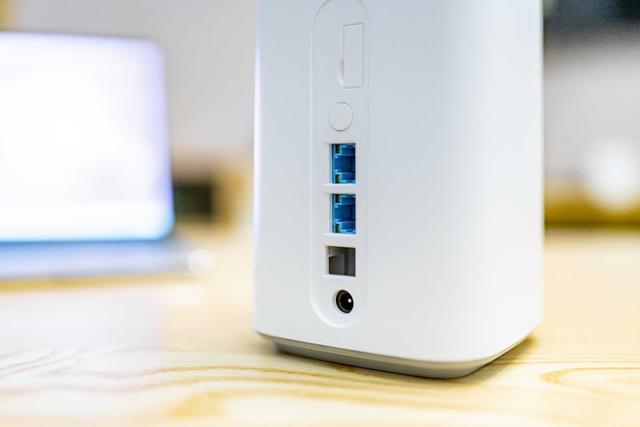 The Huawei 5G CPE Pro 2 can supply up to 128 devices simultaneously with a WLAN connection. The WLAN network on 5 GHz is preferred by the Huawei 5G CPE Pro 2 by default, i.e. even if you explicitly connect to the 2.4 GHz network, the connection is established on 5 GHz, provided the end device supports this frequency range. The user benefits from significantly higher speeds, but can of course also deactivate the function in the web interface if necessary.

The Huawei 5G CPE Pro 2 can either be configured via the Huawei AI Life app (Android and iOS) or via the web interface (IP: 192.168.8.1). Both the app and the web interface are visually appealing and easy to use. All important functionalities are available, including, for example, the ability to call up statistics on the Internet connection or information on the connected devices.

Overall, the range of functions is unfortunately relatively limited, especially professionals and network experts will certainly miss some functions. It starts, for example, with a simple time switch for the WLAN and goes through to manual technology or frequency band selection for the modem. None of this is possible with the Huawei 5G CPE Pro 2.

The Huawei 5G CPE Pro 2 made a very good impression in the test. The device is very fast in both the 5G network and the LTE network and, thanks to WiFi 6, passes the internet connection on to connected end devices just as quickly. Operation is very easy thanks to the stylish app and clearly structured web interface.

The weak points are the connections (only Gigabit LAN, no connections for an external antenna) and the comparatively small range of functions of the software. If you can live with these points of criticism, you can get a very good 5G router for around 450USD.