After the release of Netgear Aircard 810s, Netgear then presents the fastest mobile WiFi Nighthawk M1 hotspot. The two mobile WLAN hotspots are well-known because they are very fast LTE modems, which makes Netgear Wireless dominates the wireless gadgets equipment. Based on Qualcomm’s high-level chipset, the AirCard 810 Hotspot can achieve downlink up to 600 Mbps while the Nighthawk M1 can even reach up to 1 GB / s in the downlink. The Nighthawk M1 also has the advanced features, but the AirCard 810 hotspot has its advantages, as this comparison shows. 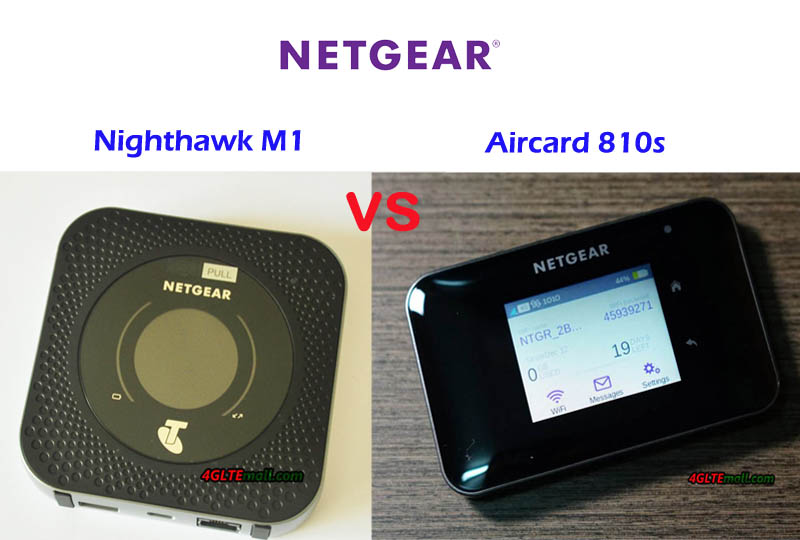 The Netgear AirCard 810 LTE Router has been available in many countries for a few years. When it’s first available in the market, it’s the fastest LTE hotspot (LTE Cat11, up to 600 Mbit/s). In our test, the AC810 proves its ability for wireless connection. The Netgear Nighthawk M1 is to be regarded as a direct successor to the AirCard 810 hotspot and has been officially available in the market since the second half of 2017. However, the concept of the AirCard series was only partially continued, and the Nighthawk open a new series for Netgear LTE advanced Pro gadgets. 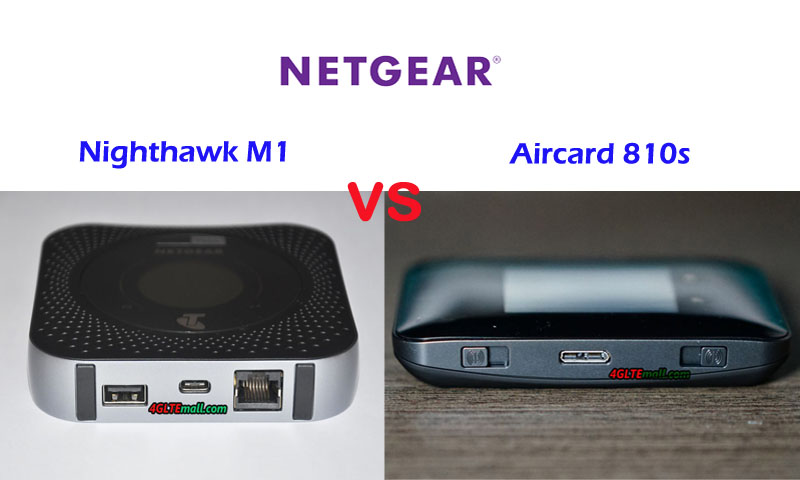 The design of the two Netgear LTE hotspots is very different. The AirCard 810 router is significantly smaller than the Nighthawk M1, but still comparatively large for a mobile LTE hotspot. The big touchscreen display on the front of the AC810 catches the eye. The Nighthawk M1 also has a very eye-catching display, but the round screen has no touch function. On the display, the AirCard 810 router seems has more advantages.

In terms of connections, the Nighthawk M1 mobile router is far ahead than Aircard 810. In addition to USB Type C for charging and connecting to the computer, the M1 offers a standard USB port for use as a power bank (charging other devices) as well as an RJ45 Gigabit Ethernet LAN port. Both WLAN hotspots are equipped with two TS-9 connections, to which an external mobile radio antenna can be connected. The battery is changeable in both devices; the Nighthawk M1 has a much stronger battery of 5040mAh, compared with the AC810 2930mAh battery capacity. In addition, the two mobile routers use SIM size in Micro SIM card. 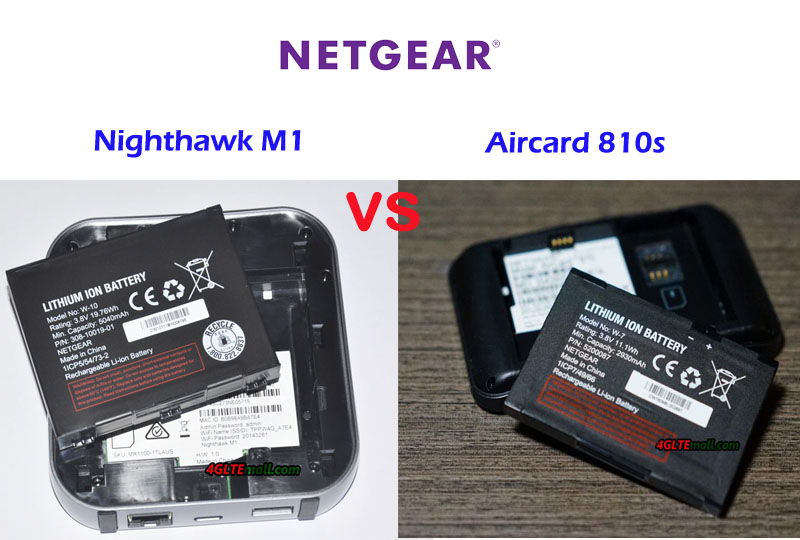 On the datasheet, the Qualcomm LTE modem in the Netgear Nighthawk M1 is significantly more powerful than the AirCard 810 router. The Nighthawk M1 not only supports up to fourfold channel bundling (4CC CA), but also the 4 × 4 MIMO antenna technology. The AirCard 810 Router can handle a maximum of three carrier aggregation and 2 × 2 MIMO. The 256QAM modulation is available in both two routers.

In practice, the maximum speed was limited more by the mobile network than by the router, so there were hardly any differences between the two devices (tested with unlimited rates from Vodafone and Telekom). However, there were differences in “simple” LTE reception without channel bundling. Here, the Nighthawk M1 was often a little faster on the go. Even in the UMTS network, the Nighthawk M1 has usually made a little faster speed in the downlink than the AC810. By the way, GSM/2G cannot be handled in both hotspots. 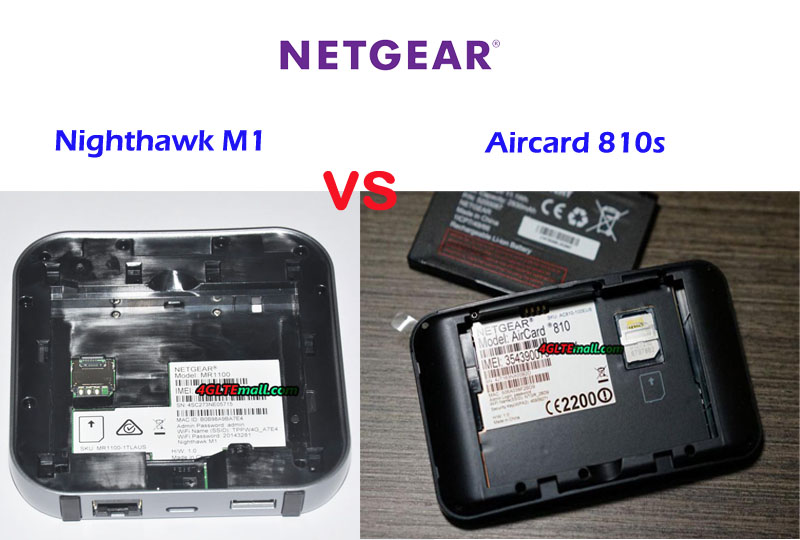 The Netgear Nighthawk M1 offers the slightly better wireless network performance compared to the AirCard 810 router and the slightly better gross data rates, as shown by the test with multiple devices. Both devices support WLAN at dual-band 2.4 GHz and 5 GHz. There is a difference in the maximum number of devices simultaneously connected via WLAN: up to 20 simultaneous users are possible with the Nighthawk M1, only 15 with the AC810.   Both the Netgear AC810 and the Netgear Nighthawk M1 offer a so-called offload function, also known as “WLAN Extender”. As an alternative to the integrated mobile modem, the user can use an existing WLAN connection as Internet access. In the case of the Nighthawk M1, Internet access can alternatively also be established via the RJ45 LAN interface. The offload function is particularly interesting in hotels, at events or in the home and can help to save data volume on the mobile rate.

In terms of operation and configuration, the two Netgear LTE routers differ only minimally. Of course, the AirCard 810 hotspot offers the advantage of the touchscreen display, so some settings can be made conveniently directly on the router. With the Nighthawk M1, you either have to call up the web interface via a browser or use the Netgear Mobile App (available for Android and iOS). If you want to change the AC810 more than just basic things, you have to use the web interface or the app there as well.

The web interface offers a bit more features compared to the Netgear Nighthawk M1, but the AC810 is by no means badly positioned here. Both devices are easy and uncomplicated to use, the app is suitable for less technically savvy users, maybe even better for the operation than the web interface.

In direct comparison, the Nighthawk M1 is clearly the better router. The modem is better and provides for higher data rates than average, there is an RJ45 LAN connection and the battery has been improved significantly compared to the AirCard 810 again. The waiver of a touch screen is a pity, even though, it’s still given the high price of around 459.00USD. With WLAN, the Nighthawk M1 also offers advantages over the AC810, the range is slightly better and the data rates are higher in many situations.

Anyone who is prepared to pay a high price, clearly gets better mobile hotspot Nighthawk M1. But the AirCard 810 router is still old-fashioned: Compared to the Nighthawk M1, the 810s offers a more compact and pocket-compatible size and can be operated via touchscreen. You do not have to know too much about technology, the software is largely identical. For around 250USD, you will not get disappointed with the AC810.