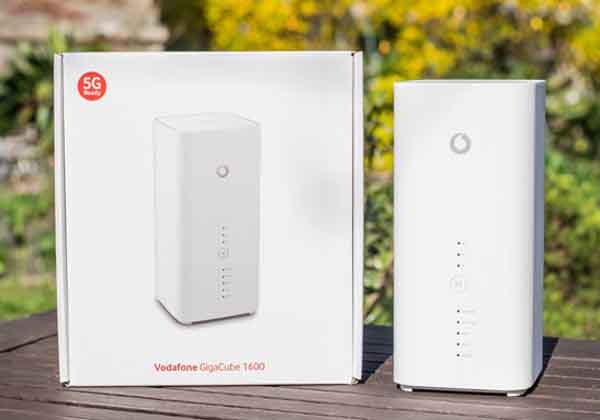 Vodafone GigaCube Cat19 is sold since March 18 and now becomes the fastest LTE wireless router for home. The new GigaCube is manufactured by Huawei and comes from the model number B818-260 and supports LTE Cat. 19. The Huawei router is designed for download speeds of up to 1.3 Gbps. Currently, Vodafone offers up to 500 Mbps downstream in the GigaCube Cat19 tariffs.

The words “5G ready” are on both the packaging and the GigaCube Cat19 itself, Vodafone and Huawei are moving along the paths of AT&T, because the router is not compatible with the new 5G radio standard. In addition to the router itself, the package contains a power adapter and a network cable. The device has two LAN port, one of which can also be used as a WAN port. Thus, the GigaCube can also serve as a wireless router for an existing Internet access – for example, to extend the range of the wireless network. Also an installation guide is included in the package.

The new GigaCube Cat19 is significantly larger and heavier than the previous model such as Huawei B528 Gigacube. The router is 103 x 103 x 225 millimeters in size and about 700 grams heavy. So the GigaCube is more suitable to be used in a fixed place and not good to be moved. If you want to use the router, you will need a power connection.

The GigaCube Cat19 is well made and has logos of Huawei on the top and Vodafone on the front. On the back is then the already mentioned lettering “5G ready” to see. Below the Vodafone logo are three LEDs, which serve as S-meter for mobile reception. Underneath, the manufacturer has installed the WPS button, which allows suitable devices to be integrated into the WLAN network at the touch of a button. 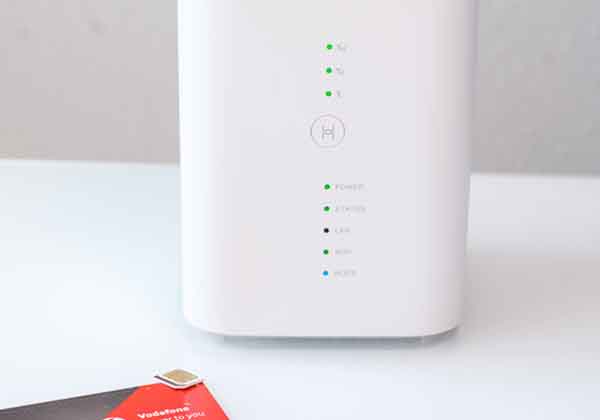 Further down there are another five LEDs. These show the power supply and the status (data connection disconnected, firmware update is being carried out, IP address is being retrieved). Below, visually, a possibly existing LAN connection is displayed, among which there is the LED for the WLAN status (on or off, establishing a WPS or HiLink connection) and finally the mode in which the router is currently operating becomes (for example turquoise, blue and yellow for LTE, UMTS or GSM).

On the back there are connections for external antennas under a cover. Underneath is the on / off switch followed by a USB-A socket and two LAN ports. On the bottom, there is the SIM card slot. As with most other LTE routers, a micro-SIM is used. If you need the external antenna for Vodafone Gigacube Cat19, you may check here: https://www.4gltemall.com/vodafone-gigacube-cat19-4g-external-antenna.html

Also at the bottom of the case there is a sticker with the most important data about the device (SSID and WLAN password, web address for configuring the router and the temporary password, which must be changed when browsing for the first time or via the HiLink app from Huawei accesses the GigaCube). There is also a QR code for making the WLAN connection. Last but not least, another sticker shows in which direction the SIM card has to be inserted. 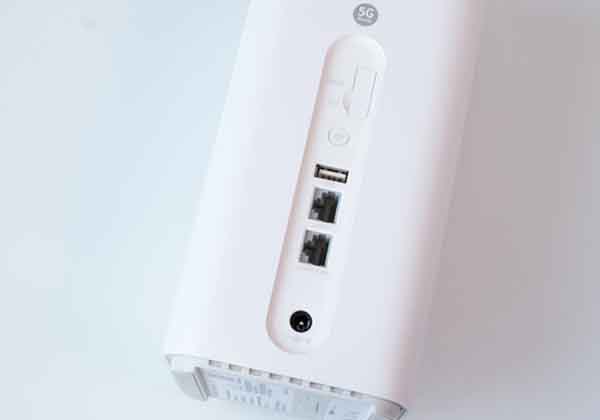 Configuration on the web or via app

The configuration for the GigaCube Cat19 can be adjusted via app or web interface, where individual settings for SSID and WLAN password can be made. The default setting, in which the WLAN networks are used in dual-band at 2.4 and 5 GHz. In addition, a guest Wi-Fi can be set up. A time control can be used for this, so it automatically deactivates after certain time.

The Huawei B818 router menu graphically shows the connections between the mobile network and the GigaCube Cat19 or between the hotspot and the connected devices. Here you can also read the currently used network standard and the data transfer rate. In addition, the number of connected clients is displayed and you can see at a glance which WLAN frequency range is currently being used. 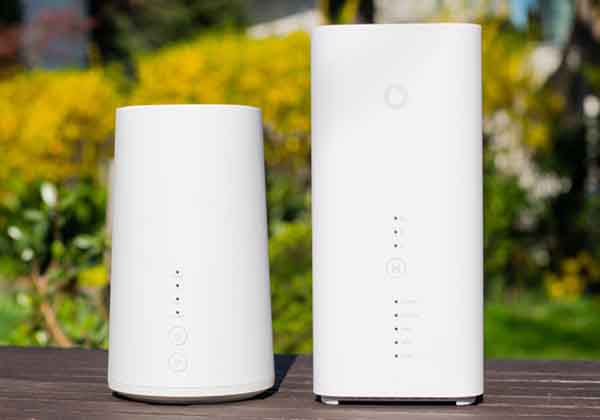 Surf over the new GigaCube Cat19

The GigaCube Cat19 is up and running quickly. After inserting the SIM card, the power connection is established. The device boots automatically and if the SIM card is not protected with a PIN, the router logs in after a short time on the Internet. If the SIM protection is active, the PIN number must first be entered via a connected smartphone, tablet or notebook via the app or web interface. It can also be adjusted that there will no longer be an appropriate query in the future.

In the test we had a good LTE-800 connection. Depending on where we set up the GigaCube Cat19, we achieved data transfer rates between 41.1 and 50.3 Mbps in the downstream. The better value was achieved on a window from which there is visual contact with the mobile radio base station. However, it is interesting to note that at 30.7 MBit/s in the upstream, we even had a slightly lower data throughput than at another location in the same apartment (31.5 MBit/s), where the radio waves are also shadowed by the building.

We have tried the GigaCube Cat19 in a four-room apartment, which can be almost completely covered with an Huawei B618 WiFi Router with wireless Internet access, provided that the router is placed approximately in the middle. The Wi-Fi signal of the GigaCube Cat19 was noticeably weaker. In unfavorable reception locations, the smartphones used in the test (Apple iPhone XS Max and Blackberry KEY2 Dual SIM) even book from the WLAN network. 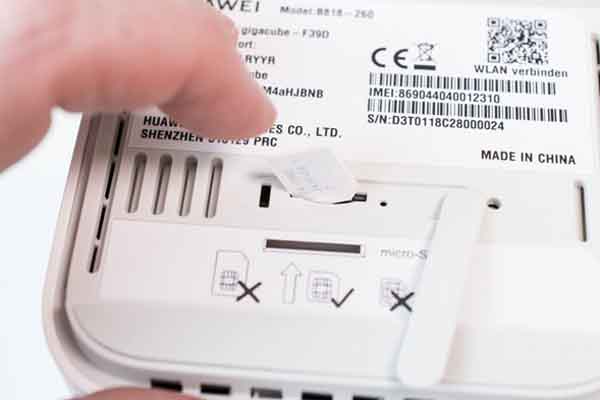 For a mobile router, a not so strong Wi-Fi signal is quite normal. Since the GigaCube Cat19 is rather intended for indoor use and for large space, we were a bit disappointed in the test. However, for smaller apartments or caravans, the wireless network is sufficient in any case. In addition, the hotspot also delivered a reliable Internet access even in continuous operation over several days.

In the test, the GigaCube Cat19 left a good impression. The mobile reception is good, the Wi-Fi hotspot works reliably at 2.4 and 5 GHz. With LTE Cat19, the device is also prepared for the next few years, even if the advertising print “5G ready” not really tell it can’t support 5G standard.

But the WLAN signal could be a bit stronger and the GigaCube Cat19 is a bit big, unwieldy and heavy. Transportation by train or plane is definitely not fun. Anyone looking for such a router only for fixed operation at a place of use may consider the new Huawei router from Vodafone.